You are here: Home » Crafts & DIY » Holidays » Father’s Day Golf Monogram Pallet Art #cbias
5.6K shares
Okay guys, I am so excited to show you this pallet project that I created out of golf tee’s for Father’s Day as a part of a sponsored post with Collective Bias and Wal-Mart.
Father’s Day isn’t the easiest holiday to craft for, so when I was approached to buy something from Wal-Mart and craft up a Father’s Day gift, I was a little stumped.  But then I started thinking about what my husband loves… and there is only one thing he truly loves – golf.  He would spend all day, every day on the golf course if he could.  (Personally, I don’t get it.  It seems to be the most boring game on earth, but it’s not about me, right?)  He is just so very passionate about the game that he watches the PGA tour (is that what it’s called?) and this new reality golf show too.  It’s just his thing.  I knew that I had to create him something special for all of the many, many things he does for us and ways he protects and provides for us.  He even (sometimes) gets on board with my craft projects.  So I really wanted to make something that would have meaning for him, and not me. 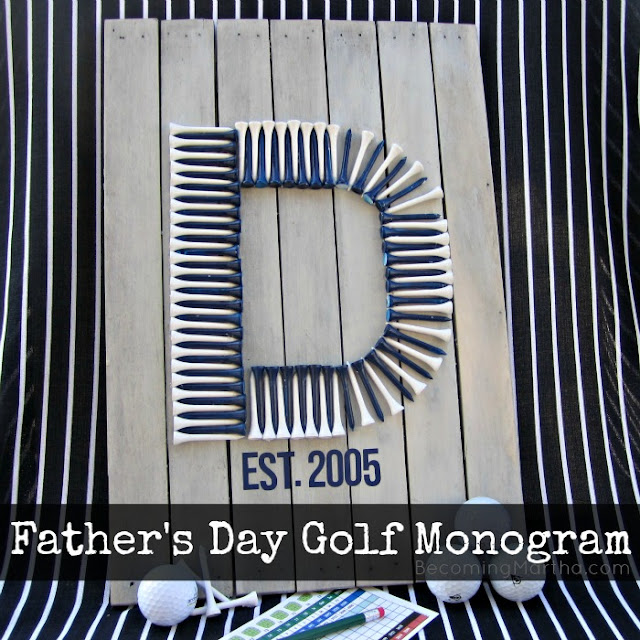 So when I went to Wal-Mart, I decided to shop the golf section for inspiration. (Check out the pictures from my full shopping trip to Wal-Mart here – you’ll get to see what my little ones were up to while I was looking at golf stuff!)  I grabbed a few bags of golf tees with the idea to make some sort of pallet art that would have meaning to him.
I’ve had this crate sitting around my backyard for a looong time.  Like we’re talking years.  I can’t tell you how many times my husband has thrown it out and I have dug it out of the trash.  I decided I would finally put it to use and show my husband that I was right to keep it!  (I can’t wait to tell him that’s what it’s made of – it will be an even deeper little joke for us.)
And that’s where this Father’s Day Golf Monogram Pallet Art started…

I began by pulling all the boards off, which wasn’t hard, since it was falling apart anyway. 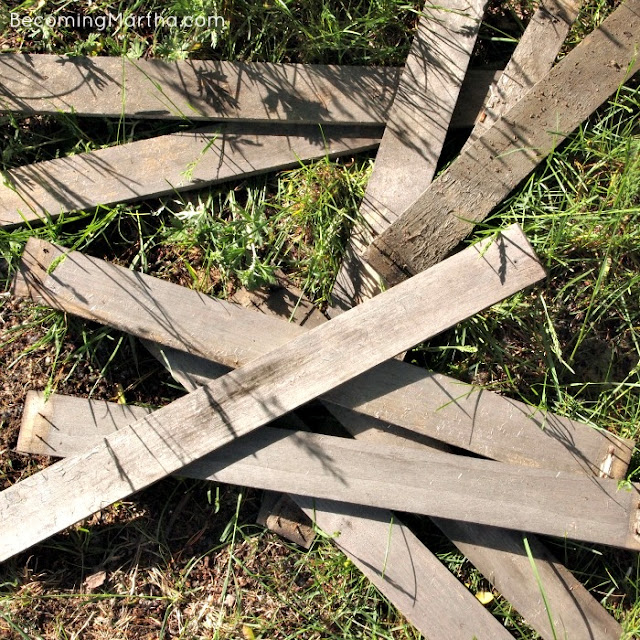 See all those rusty nails?  Makes you wanna update your tetnus shot, doesn’t it?  They’re easy to get out though, just grab a pair of pliers and pull them right out.

After removing all of the nails, I laid out boards and braced them in the back with extra slats.  I used a brad nailer to attach them… but don’t use 2″ nails.  You will nail into your table top.  Not that I’m speaking from experience.

After it was put together and I cut the extra off the end of the side (I used a miter saw but it could be easily cut with a hand saw), I used a palm sander to remove any dirt and rough spots.  Oh, and this is a real true Father’s Day gift – because he doesn’t have to do any of the tool work!

I loved all of the uneven and natural tones and textures in the wood, so I didn’t want to paint it, but I did want to make it a white tone.  I decided to whitewash it.  Whitewashing is so simple – Mix white paint and water.  More paint then water will equal more coverage, more water will mean less coverage.  I did about 1 part paint to two parts water.  I put it in a baby food jar and then shook it up.

I applied it with a paintbrush, but you could just use a rag as well.

After you paint it on, just wipe it off with a rag.  I did two coats of whitewashing – and because it’s so thin, it dries super quick.

Then, I took the golf tees and spray painted half of them navy blue.  I used navy because almost ALL of his golf shirts are navy, and I always comment on that.  Now, a tip about this part – the tees are super glossy.  Use spray primer first and just to be safe, you could use a spray paint to use for plastic.

To glue them on in a straight line, I used a popsicle stick to line up the glue.

I glued on a small section of white and then went back and filled in the spaces with blue.

The only tricky part is the curves of the D, but just play around with them to make it perfect.  As a finishing touch, I added a little vinyl cutout that says “Est. 2005”, since that’s the year my husband became a dad.  And the D was for Dad, but it’s just coincidence that it’s also his monogram.  How fun would this be in a P for Papa or G for Grandpa?  And if they are a golfer… it will have double the meaning!

I am so excited to give this to him – he will love it!  And now that he has an office, I know he will have the perfect place to hang it.  Maybe I can even make some more golf related art to go along with it.  It will also be a great gift for this Father’s Day because my husband is actually home this year – since he is in the military, he’s always on holidays. I think a picnic is in order – what about you?  What are your plans and/or traditions for Father’s Day?  I would love to hear about them!

MORE FROM THE SIMPLY CRAFTED LIFE

Sarah Desjardins is a mother of two girls, a wife, an elementary school teacher, and a self proclaimed glitter addict. The Simply Crafted Life is a place for anyone who wants to make their domestic life more beautiful and creative. Sarah started The Simply Crafted Life as a place to find bliss between the diapers and the dishes, and invites you to do the same.

I'd love to hear from you! Leave a comment! Cancel reply

This site uses Akismet to reduce spam. Learn how your comment data is processed.

Sarah Desjardins is a mother of two girls, a wife, an elementary school teacher, and a self proclaimed glitter addict. The Simply Crafted Life is a place for anyone who wants to craft a life that is both creative and simple. To read more about this blog and my crazy journey, click here.

Stay up to date

Don't miss all the latest!