You are here: Home » Parties » A Glam Peacock Confetti Celebration
115 shares
Does anyone else feel like they do more in December than they do during all of the other months combined? These past few days have been utterly ridiculous, so I hope you excuse my absence.  I went four days without even turning my computer on because I simply didn’t have a chance to.  I don’t think that has ever happened in my life before!
One of the things I was doing was planning and hosting a surprise party for my amazing friend Melanie.  If you are new to the blog, you may not have read Mel’s story.  She is one of my closest friends who was diagnosed with brain cancer.  The outlook was extremely grim, but due to a wonderful church family who prayed her through, she completed her last chemo treatment on November 19.  (Seriously, go read all about her amazing miracle here.)

My friend Nikki and I planned, organized  and decorated the whole thing, and boy was she shocked!  She stood in doorway for a full 2-3 minutes while she processed what had just happened.  It was kinda funny, no one moved or said a word, we all just stood there wondering what to do.  Finally, Mel said “You mean, it’s not Connor’s birthday?” 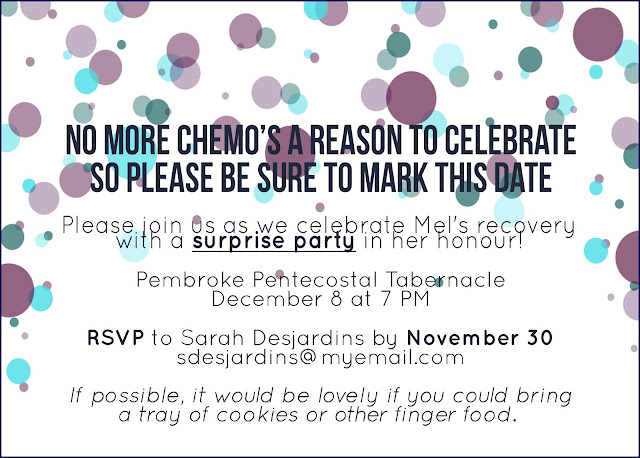 The first thing we decided on was the colors – peacock colors in pretty shades of blue, green, and purple.  Then, I created the invitation, which was sort of confetti-ish, to signify the celebration.  Then the confetti theme just overtook the whole thing.  After we were done setting up, I realized how awesome this theme would be for a New Years Eve party – so if you’re hosting one, you have come to the right spot!

I find it very hard to photograph parties – I can plan a mean party, but when it comes to photographing it?  Yeh… not so hot.  I’m always running around, busy finishing up last minute details, and I don’t have the time or focus to get a good shot. Like the above picture, in which I totally forgot to adjust my aperture for such a wide shot.  Oh well, here is the general overall idea, and I will show you close ups of all the little bits.

We set up a hot chocolate bar with some toppings, whipped cream, caramel, and homemade chocolate covered stir spoons.  They were tied with adorable co-ordinating ribbon. The food labels and tags were all created using the invitation background.
Across the table, we scattered sequins in purple, teal, royal blue, and aqua.  (We couldn’t find loose sequins. So we bought 15m of sequin trim, thinking it would be easy to seperate.  Umm… yeah.  Easy?  Yes.  Time consuming and highly annoying?  Double yes.  We’ll leave it at that.)  It did however totally tie together the whole “glam confetti” look.  I cut out a million pieces of small cardstock circles using a scrapbooking punch and my silhouette, but the paper just didn’t have the same effect as the sequins.

I created water bottle labels with the same pattern as the invitation.  On them, I typed five words that described Mel’s journey through cancer – faith, hope, perseverance  courage, and strength.  If you were having this as a new years affair, it would be great to type five words to describe the past year.

Here are the centerpieces – the daisies were a deep purple, but for some reason photographed red.  The ornament and feather tutorial I shared here.

These centerpieces were on the small tables.  We took glue and dabbed it inside the small vases (they were actually glasses that we bought at the Dollar store) and then shook sequins inside so that they stuck on in a random pattern.

This is Mel’s guestbook table.  I will be posting on it later this week – it’s basically a photo book/guestbook/memory book that is totally awesome.  I didn’t think she would read it at the party, but she did, and totally started bawling!  It’s based on Proverbs 31 and the characteristics that she has as a mother, wife, and friend.

The backdrop was created using strings of Christmas lights that were strung vertically.  In between every second row of lights, I hung a string of small Christmas ornaments that were tied on fishing line.  The lights made them glitter and sparkle, and their circle shape added to the confetti idea.

We made tissue poms in the party colours and hung them over the side tables.  The HOORAY banner was made by cutting letters out of cardstock, and then brushing with glue and pouring on a very liberal dose of glitter!

The top of the second banner, which hung on the hot chocolate bar, was also made in the same way, with cardstock letters and glitter.  To make the penants, I used the same background that I created for the invitations, but instead of glittering the letters, I glittered some of the “confetti” on the background.
See, what a great New Year’s Eve party this would make right?  You wouldn’t have to change much at all.  Now all of my party planning is over until Stella’s birthday in May… do you think it’s too early to get started on that?  🙂

MORE FROM THE SIMPLY CRAFTED LIFE

Sarah Desjardins is a mother of two girls, a wife, an elementary school teacher, and a self proclaimed glitter addict. The Simply Crafted Life is a place for anyone who wants to make their domestic life more beautiful and creative. Sarah started The Simply Crafted Life as a place to find bliss between the diapers and the dishes, and invites you to do the same.

I'd love to hear from you! Leave a comment! Cancel reply

This site uses Akismet to reduce spam. Learn how your comment data is processed.

Sarah Desjardins is a mother of two girls, a wife, an elementary school teacher, and a self proclaimed glitter addict. The Simply Crafted Life is a place for anyone who wants to craft a life that is both creative and simple. To read more about this blog and my crazy journey, click here.

Stay up to date

Don't miss all the latest!